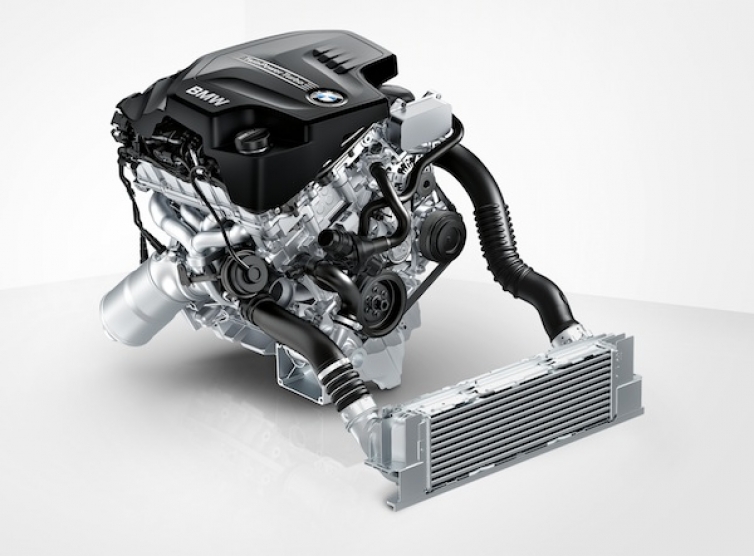 BMW of North America announced today a continuing evolution of efficiency, power and technology with the introduction of the new TwinPower Turbo 4-cylinder engine (N20) to the X3 xDrive28i. The new engine replaces the outgoing nominally aspirated inline 6-cylinder engine (N52) as the next step in BMW’s EfficientDynamics strategy. It is scheduled for April 2012 production and delivery to US BMW Centers in May along with the continuing BMW X3 xDrive35i with a base price including destination and handling of $37,995 and $43,595 respectively.

In addition, the updated X3 xDrive28i and the X3 xDrive35i now in its second year of production will offer new technology never before offered on the X3 by introducing new combinations of package and equipment options – a new Driver Assistance Package option (ZDA) will include Lane Departure Warning; and the optional M Sport Package will add 19” wheels to the X3 xDrive28i. The X3 also has several upgraded standard equipment enhancements as a recipient of 5, 6 and 7 Series technology. The new standard equipment offerings for both models are Auto Start Stop, and Driving Dynamics Control with ECO PRO. The Power Tailgate, 18” wheels, and chrome tailpipes are new standard offerings for the X3 xDrive28i previously standard on the X3 xDrive35i.

The BMW X3 significantly extends its impact on the segment by establishing even newer standards created by its predecessor. The X3 xDrive28i and X3 xDrive35i builds on the success of the original X3 by incorporating new technology, options and packages that were previously only available on BMW 5, 6, and 7 Series cars. More technology, options and packages for both X3 models will now be available providing more agility, efficiency and comfort in the class segment that the X3 started and defined back in 2004.

With the launch of the N20 engine introduced in the Z4, 528i, the all new 328i, the new TwinPower Turbo 4–cylinder engine is now making its first appearance in the BMW X3 xDrive28i. In keeping with the dynamic overall theme of BMW Sports Activity Vehicles, this new-generation turbocharged engine offers plenty of power, responsive acceleration, torque and low weight for exceptional performance. The new 4-cylinder engine, which provides noticeably livelier power for more driving enjoyment, also comes with lower fuel consumption (preliminary) than its predecessor.

The state-of-the-art, lively 2.0-liter engine marks a return to BMW’s roots – it was with lightweight, high-performance 4-cylinder engines in a similar vein that the BMW 3 Series Sports Sedan made its debut back in 1975.

The significant upgrade in power and efficiency is chiefly down to the use of BMW TwinPower Turbo technology, which combines High Precision Direct Fuel Injection, Double-Vanos variable camshaft timing and VALVETRONIC variable valve timing along with twin-scroll turbocharging. On the new-generation 4-cylinder engine, this world-exclusive technology package from BMW again provides a very efficient way to extract more power from the engine, rather than taking the route of a much larger displacement and, in the process, adding to the weight and therefore to fuel consumption. This explains why the more dynamic performance and driving enjoyment does not come at the expense of higher fuel consumption and emissions.

The new BMW TwinPower Turbo 4-cylinder’s displacement of 1,997 cc delivers maximum power of 240 hp / (180 kW) at 5,000 rpm while thanks to twin-scroll turbocharging, the maximum torque of 260 lb-ft is developed at just 1,250 rpm and remains constant up to 4,800 rpm. These statistics translate to commensurately dynamic performance: the BMW X3 xDrive28i accelerates from 0 to 60 mph in just 6.5 seconds (preliminary), on its way to an electronically governed top speed of 130 mph. The engine responds instantly when the driver demands more throttle and the vigorous and almost linear power delivery from only slightly above idle continues all the way into the higher rpm range.

BMW TwinPower Turbo technology in the new 4-cylinder engine.
This new engine is the most powerful in a new generation of 4-cylinder engines designed in accordance with the BMW EfficientDynamics strategy, which aims to combine increased driving enjoyment with reduced fuel consumption and emissions. In technical terms, this new 4-cylinder engine is modeled on the current multi-award-winning inline 6-cylinder engine with BMW TwinPower Turbo technology (N55), which is the benchmark in its class for dynamic power delivery and efficiency. This world-exclusive technology combines High Precision Direct Fuel Injection, Double-Vanos variable camshaft timing and VALVETRONIC variable valve timing with twin-scroll turbocharging.

These features give the BMW X3 power not expected from a naturally aspirated engine which would require more cylinders and larger displacement. At the same time, with its all-aluminum crankcase, this engine is lighter and more compact than a 6-cylinder engine of equivalent power. This has obvious benefits for driving dynamics: the reduced load on the front axle gives this BMW SAV greater agility and more improved steering and cornering characteristics.

Twin-scroll turbocharging.
The new 4-cylinder engines feature twin-scroll turbocharging. This means that the exhaust stream from cylinders 1 and 4, and the exhaust stream from cylinders 2 and 3, follow separate spiral-shaped paths to the turbine wheel. This reduces exhaust back-pressure at low engine rpm, allowing the energy of the exhaust gas pulses to be utilized as efficiently as possible. The result is instant throttle response and fast-revving performance that BMW drivers can instantly translate into driving pleasure.

VALVETRONIC, Double-Vanos and High Precision Direct Injection.
The combination of a high power output and a simultaneous reduction in emissions is achieved by VALVETRONIC variable valve timing and Double-Vanos variable camshaft timing. Seamlessly variable control of intake valve lift dispenses with the need for a throttle butterfly. Instead, the air mass is controlled inside the engine, resulting in faster response. At the same time, pumping losses have been reduced to a minimum.

The excellent efficiency is also down to the High Precision Direct Injection system. Centrally positioned between the valves, solenoid injectors precisely control the supply of fuel. The fuel is injected very close to the spark plug, with a maximum injection pressure of 200 bar (2900 psi), resulting in clean and homogeneous combustion. The cooling effect of the directly injected fuel also results in higher compression than on port injection engines, bringing further efficiency improvements.

Exceptional performance assisted by innovative design features.
The exceptional performance of the new engine is also due to various innovative features of the core engine. For example, twin balancer shafts positioned at different heights result in optimized vibration absorption, while a centrifugal pendulum absorber integrated in the dual-mass flywheel conveys a reduction in irregular running at low engine rpm. The driver can therefore make full use of the strong low-end torque without sacrificing smoothness. These factors all help to explain why the new 2.0-liter 4-cylinder engine achieves refinement, noise and vibration of a kind that was previously reserved for BMW 6-cylinder engines.

It is estimated that the BMW X3 xDrive28i will provide much improved fuel economy figures with the new TwinPower Turbo 4-cylinder engine over the former 6-cylinder engine it replaces as it has with other BMW models that have transitioned from 6 to 4 cylinder engines like the Z4, 528i and 328i. With the anticipated fuel economy ratings at the end of the EPA test cycle, the new BMW X3 is projected to be the most fuel efficient gasoline powered BMW SAV sold in the US to date.

BMW X3 xDrive35i: Inline 6-cylinder engine with beefy power delivery, strong torque and superb refinement.
Fans of large 6-cylinder engines have a treat in store too. The inline 6-cylinder engine (N55) in the new BMW X3 xDrive35i will impress performance-minded drivers with its effortless power, exceptionally fast-revving temperament and outstanding refinement. The N55 has been setting standards from the start, as the pioneer of a new generation of engines in which BMW TwinPower Turbo technology with High Precision Direct Injection and VALVETRONIC variable valve timing plus a twin scroll turbo made its debut.

Thanks to intensive fine-tuning of the engine, BMW’s engineers have now further reduced the fuel consumption and emissions of the predecessor, while at the same time maintaining its high performance. With a maximum power rating of 300 hp/(225 kW) at 5,800 rpm, the 3.0-liter 6-cylinder unit reflects the sporty personality of the BMW X3 xDrive35i and helps deliver brilliant performance. The high peak torque of 300 lb-ft, on stream between 1,200 and 5,000 rpm, ensures that the power is effortlessly and instantly delivered.

The X3 continues to evolve with new Technology.

Auto Start/Stop will now be standard on both the X3 xDrive28i and X3 xDrive35i. Under certain driving conditions, Auto Start/Stop turns off the engine when the vehicle comes to a stop, providing up to a 3% improvement in fuel economy. Once the driver’s foot is removed from the brake or the steering wheel is slightly turned, the engine will re-start automatically. This feature can be switched on/off via a button located next to the Start/Stop button.

Driving Dynamics Control with ECO PRO can be accessed by a button on the center console enabling the driver to select a new “ECO PRO” mode. ECO PRO enhances fuel efficiency by:

All BMW X3s are produced in an expansion of BMW’s plant in Spartanburg, South Carolina. Technical specifications and EPA mileage ratings for the 2013 BMW X3 Sport Activity Vehicles will be announced closer to the on-sale date.