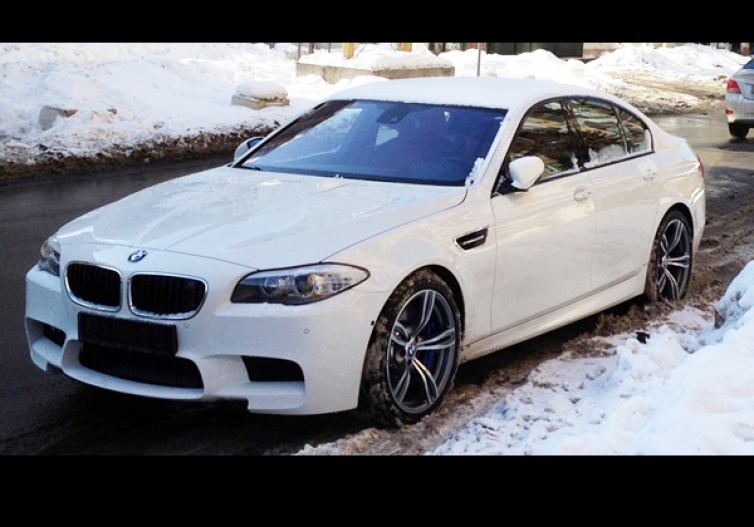 An alpine white F10 M5 has now been delivered to a site member – Singularity. Although the owner and car are now experiencing some wintry weather, we nonetheless get some nice insight and review of another new M5.

There’s now been several deliveries in  M5 forums and more to come as we head towards the warmer weather of Spring and especially when US deliveries begin this Summer.

My car arrived today and as a long-time reader and M enthusiast I’ll give my review. The car has only 70 km on it and there’s still a long way for the break-in and first service maintenance which is at 2000 km, until then manual asks to drive below 170 km/h, below 5500 RPM and avoiding full pedal acceleration so my review is rather limited right now because of that and because there’s a lot of snow, ice on roads outside and slippery summer-tires. Had to wash the car 3 times in 2 days already.Prior to purchase I had read many car magazine reviews, forum speculations and estimations and new owners’ reviews. As an owner I can say that only “owner reviews” I have read up to day reflect the feeling you get when you sit in the car. This car will overwhelm you and exceeds owners’ expectations that one can gather online. Some facts to consider when reading my review is that the car is fully optioned on all available extras, Alpine White/Sakhir Orange full leather interior also in the past I’ve owned M6 (E63) and driven a friend’s M5 (E60) and X6M 2011 for comparison.Dimensions and feeling
The car is big in dimensions and feels pleasantly heavy (not slow) when cruising at low speeds and traffic jams. The exhaust note compliments the feeling, but I’ll get to that later. It feels like a powerful ship, you see the wide hood in front of you and gives the feeling of driving a war boat in complex with it’s suspension and comfort mode. This awesome feeling of driving a machine FULL of power wasn’t present even on X6M.Acceleration
As I said there’s a lot of snow and ice on roads and I won’t be pushing the car’s handling or acceleration or handling in curves until the break-in period is over. As soon as you drive it off, you feel like driving a high-quality, luxury, comfortable car with a LOT of power under your foot. The turbo lag exists – compared to [email protected] RPM, but it’s so minor that it’s not even relevant. It’s so minor that it’s not worth writing about it and you’ll never think that it exists unless you want compare it to S85 @4000 RPM, so power is almost instantaneous and absolutely nothing to even consider when buying. Push the gas and you get the airplane take-off feeling, scare effect and a feeling of acceleration and speed is much better than on E60/E63, you smile when you drive it, you feel proud of what you drive and might look like an idiot at a traffic light because of how much satisfaction you get and you’re smiling alone. It’s so powerful that you want to drive it humble and rarely push the gas, like it’s a “nuke button”, you know you can nail it down and hell will break out. I don’t know what feeling you get in a Ferrari because I haven’t driven it, and frankly I don’t want to, I doubt it will give the effect of a heavy luxury car with insane power. Also I already had a bunch of people drive up to me complimenting the car, it’s beauty and gazes during the short night ride in snow with comments like “is that the new M5??????” “thumbs up! oh my god”. Overall this car is VERY fast, feels very fast and much faster than E60/E63 because of size/power/luxury complimenting each other and giving an overall satisfaction in every aspect that you can think of.

One of the things I doubt we’ll get here is the E60/E63’s brutal clutch engagement and push when in S6 and manual shifting at red lines with DSC off, again I don’t know if others even experienced it on their M5/M6s and if they liked it.

Handling
This car is big, wide but you are easily able to estimate its dimensions when maneuvering in a traffic jam, steering feels attached to the body directly and turning angle is noticeably better than on E60/E63, I can easily make U-turns now where I couldn’t do on M6. One annoyance is that ESP is very interfering, it interferes even when moving off a traffic light if the road is wet to the point where you want to say “Oh come on already! I’m just trying to move off a traffic light”. I haven’t had a chance to be on dry road but I guess it’s still one of relative shortcomings to put down all this power to the road.

Active Sound
I was a little worried after reading tons of forum topics from people judging a book from a cover or hating it without having driven one or simply not having one. It’s all trash talk

First of all I’ve never noticed it yet, or it sounds too natural, or it’s natural. Is it the beautiful engine sound you hear when you floor the gas? Because I don’t know what it’s about and frankly I never needed the engine sound (to compare to S85 – I’ve pushed my cars to limits, I love my E63 so much that I didn’t sell it and kept it and I did like S85’s whizzing high-pitch sound because I it was mine… I never liked the sound of driving a small race car or a bike. Even when you drive E60/E63 the sound you hear isn’t pleasant at all, it’s pleasant for others on the street, all you hear was a raw, unpolished engine sound and not of exhaust). But M5 (F10) engine sound, I don’t know if it’s natural or active sound and I don’t care, is will be useful and informative in racing situations without looking to the heads-up display or dashboard but at the same time music to your ears. Final word is that I don’t notice if there’s “active sound” or if the clear engine sound you hear when pushing the gas down is natural, also it’s barely noticeable and only happens when you push the gas pedal.

Sound
Exhaust sounds MUCH better than E60/E63. The salesperson took the car about 400-500 meters away for a wash. When he was at 200 meter distance I heard a growl (no he wasn’t flooring it, he was accelerating like on a minor takeover) at about 500 meters he stopped, put on neutral and pushed to 3000 RPM and I heard a massive low-bass sound. E60/E63’s expensive aftermarket exhausts did little to correct the raw engine noise which was sometimes unpleasant and from a driver’s perspective it made almost no difference, the unique thing about E60/E63 exhaust was the V10’s “howling” sound that other people hear when you pass by. E60 was “howling”, F10 is “growling”. The bass is massive and the driver, passengers and public outside hears this from very far away. The sound is beautiful and sounds better than any other BMW because it sounds like music to a driver’s ears. Powerful, loud and bassy. No YouTube video will capture the bass, live and YouTube are completely different things.

Interior
Like I said my car is fully optioned out, Alpine White/Sakhir Orange interior with night-vision, full leather up to high resolution rear set screens. The stitching is accurate, leather is very gentle (this is new, it’s brighter and softer than on X6M Sakhir Orange) and business/executive oriented. It’s like 7 series, but a bit smaller. There are many functions, but buttons are few, easy to navigate for previous BMW owners and work almost the same way as before. Night vision shows heated exhaust systems in cars ahead in a traffic jam so it’s only useful on highways probably. iDrive is tabbed, more functional than previous one and easier to navigate after spending an hour learning it. Bottom line is that “it’s very worth the money” when you sit in a fully optioned car, I don’t know about others. It satisfies all expectations and is pretty much like 7 series (except seat size and interior size). Rear monitors and night-vision are so far the least used and “not worth” features given their costs.

Exterior design
This car looks beautiful. Pictures on the internet won’t show the beauty, the cameras, focus and dimensions on photos are different. It’s angel eyes are crystal clear (can be bright/dim as on all new 5 series), shapes are pretty and it stands out with its aesthetic beauty. I saw Ferrari FF a couple of days ago and it seemed “small, simple and nothing special” to me. Tastes are different and there’s no argument in that, but my bet is this design will remain modern after a decade, more so than E39 did in its days.

Final word, I love it, I think about it and see it in my dreams even after I own it. New M5 is masculine, mean, aggressive but still very beautiful. A special note is about clearance, the “parking man” kept telling me to press forward when parking today and he assumed it wouldn’t hit the sidewalk – I hit the sidewalk and there’s a 1 cm scratch under the bumper. I was devastated but this happens to everyone of us and a car is not a toy, future buyers should take precaution that the car is “low” and will bump into any sidewalk. I’ve had this forum as my homepage for nearly half a year, moved here from another conglomerate forum of haters who judged the book by its cover, now that as an owner of the new beast and proud member of this forum I can say that “my dream has come true” and I’m sure this will be the feeling for future owners. After reading posts on forum, YouTube videos and magazine reviews – SEE and drive the car yourself, whatever your decision may be – it looks, sounds and feels much better in person than anything or anyone can describe online.

My review may be subjective and biased because of the personal attachment and feelings with the car, but if so it only means that the car was so overwhelmingly satisfying that it deserved being fallen in love with

I wish this car to any M enthusiast. Sorry for my English and a long review, hope it was more informative and covered some information that some people may need. I’ll give my feedback as the 2000 km and 5000 break-in periods are over and whenever I can so please ask any question you may have.